Who is Nathan Michaud? 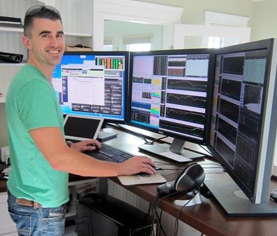 As many of you know, my name is Nathan Michaud. I started trading in 2003 and have been full-time since my 2007 graduation from the University of New Hampshire with a degree in finance.

Rather than spending my nights studying, learning poker and playing video games, I dabbled in the stock market. Even during classes back in the day, I was fully connected with streaming Level 2 and mobile trading access, thanks to my good ol’ Palm Pilot.

Fortunately, I had the world’s best girlfriend — now my wife — Laura, who took the best notes by far and never missed a deadline, due to her meticulously managed day planner.

Midday, mid-trade, she’d kindly remind me as she was studying, “Hey Nate, don’t forget — test tomorrow” and that’s when I’d look for my exit on the trade. Then I’d hit the books, cramming and vigorously reviewing her notes like a panicked short seller on a stock about to get squeezed on a breakout.

You know what? It worked. I may not have had a 4.0 GPA, but I did carry a cumulative 3.0+ GPA upon graduation. After a less-than-stellar start my freshman year, I realized I needed to open a book and go to bed before 2 a.m. each night if I was going to make this college thing work. Coming back from a few 2.0s holding you down is one helluva task!

What’s the point? I pride myself on not giving up on anything, and that includes trading. I knew I wanted to make this my career and had to find a way to make it work. I put in nearly 30 hours every weekend, working Fridays, Saturdays and Sundays at Staples until I earned $5,000 to refuel my diminishing accounts.

Too many traders want to open an account with $1,000 and make millions. You can’t just hope for a homerun that’s going to change your life. Instead, you need to have the drive, ambition and hustle to build your account on the side until you’re at a point of self-sustainability.

Trading will beat you up if you don’t have the right rules, tools, attitude and guidance along the way. At some point you’re going to hit a wall; you’ll run into a loss that sets you back and if you’re unable to adapt to the changing markets, you will not survive.

The Start of Investors Live

In 2004, I founded InvestorsLive.com to combat one of my own flaws — over trading. Each morning I’d find myself up nicely, only to give away my trading profits throughout the day. The answer? Start a blog to discuss the trades I took, explain why I took them and examine what was on watch for the following day.

The following year, I merged a prior chat room I moderated with InvestorsLive and began to build an audience of live traders.

By 2006, the Investors Live site started to gain more attention. I began to take interest in creating a subscription-based model that not only would help new traders learn to profit consistently, but focus on creating a room that kept out the noise, felt like a community and shared one common goal: to profit.

By 2007 the audience had grown to hundreds of users. I approached Bill “Muddy” and Laura of Green on the Screen — who had a like-minded site and trading room — with the idea of merging and expanding our web presence.

After timely consideration (about 10 seconds later), they were 100 percent on board and the planning began. What would we offer? What would set us apart? What would be the most beneficial to users? We settled on the creation of premium-style website designed to help share our knowledge and trades, with the goal of breeding profitable traders along the way. And that’s where it all began!

The Rise of Investors Underground

In 2008, I co-founded Investors Underground — now the leading premium live trading chat room on the net! Not only am I a trading addict, but I love helping others reach their personal goals. I’m only one private message away, and subscribers can count on a response to their question within eight hours 97 percent of the time. Additionally, we’re at it with a member-driven Q&A during our anything-goes weekend Webinar.

Let’s face it — 90 percent of traders fail, and without a proper plan and community you’re on your own. Don’t trade this market alone!

In 2013 I’ve launched my new website and most recently the long awaited DVD! Adapting to this bull market has become an obstacle for many of those who refuse to change their ways. Memberships are at an all-time high, profits are flowing and the market continues to throw out incredible momentum day in and day out.

Thanks for taking the time to show interest in who I am and what I have to offer. As always, if you have a question, your answer is only one email away.